Here’s an excellent opportunity for interdisciplinary folks and big thinkers. The Kauffman Foundation is looking to hire a Research and Policy Director to head up a program of academic research on entrepreneurship. As I understand it, this person would assemble and oversee an in-house group of maybe a dozen researchers, and coordinate with a larger network of external researchers. The goal is to better understand what sorts of policies would best encourage and support entrepreneurship.

The exciting part is that they’re looking to do something very different with this position. There is an existing academic community that studies entrepreneurship, but they are really looking for someone who will come at this from a different perspective. In particular, they want to be able to draw on insights from fields in the social sciences like sociology and psychology, as well as natural science areas like ecology and evolution. So, maybe someone in one of those areas, and with an interest in building a truly interdisciplinary community.

You can also check out the position announcement page here, or download a PDF document with a more detailed description and instructions on how to apply:  director_research_and_policy_position_description_august_2016

I should note that we are promoting this position in part as a thank you to the Kauffman Foundation for sponsoring our upcoming unconference on The Future of Careers in Scholarship. The event will be held on Saturday, November 5 in Cambridge, MA. Additional information is available at the eventbrite registration page: https://www.eventbrite.com/e/ronin-institute-unconference-the-future-of-careers-in-scholarship-tickets-28163314231

Research Scholar Michele Battle-Fisher is always out there championing the importance of systems-level approaches to thinking about health. Here are just the three latest places where you can find her.

The All Things Risk Podcast, Episode 20 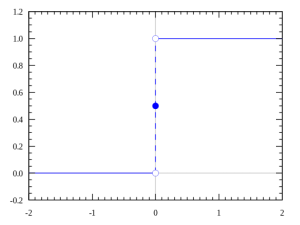 There’s a short piece in the Times Higher Ed by Henry Heller in which he outlines the transformation over the course of the second half of the twentieth century of American universities from publicly supported institutions working for the good of society as a whole to standard neoliberal corporations.

The upheavals of the 1960s and early 1970s may be seen in retrospect as an extension of the success of the 1950s, as university enrolments and funding continued to expand, and as the social and political role of universities assumed new importance. Universities became important sites of conflict over foreign policy, racism, gender equality and democracy, both within and beyond the campus. A new ideological cosmopolitanism emerged on campus as a result of the emergence of the first serious Marxist scholarship in the US, especially through the renewal of a historical perspective in anthropology, sociology, literature and history proper. Feminists opened up new opportunities for women in academe and began to create new theory around the question of gender. Most importantly, the very purpose of academic knowledge and research was questioned, especially in the Berkeley Free Speech Movement.

But from the 1980s onwards, so-called academic capitalism took hold, and universities increasingly redefined their mission to be serving private business and they themselves became, as far as possible, profit-oriented in operation and objectives. And thus was born the so-called neoliberal university, marked by the decline of the humanities and social sciences, cuts in public financing, enfeeblement of faculty and student roles in governance, increases in tuition fees, reductions in tenured faculty and increasing use of adjunct professors. Capping off these changes are the growth of for-profit institutions such as the University of Phoenix, and the growth of mainly business-backed massive open online courses, which augur a decline in the need for permanent faculty and investments in fixed capital.

The article coincides with the publication of his new book, The Capitalist University: The Transformations of Higher Education in the United States, 1945-2016, which looks like a must read for anyone who cares about the history, and the future, of academia.

The first Ronin Institute Unconference, on the Future of Careers in Scholarship, is coming up soon. It is being held on Saturday, November 5, in Cambridge, MA.

Sponsorships are now available for this unconference. If your organization is interested in sponsoring this event, you can find more information at http://ronininstitute.org/events/sponsorships/, or you can contact us at development@ronininstitute.org. 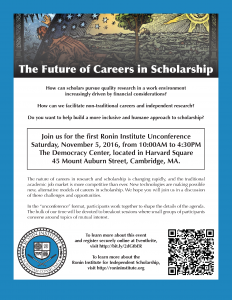 Ronin Institute Research Scholar Emily Monosson has written a new post (cross-posted as AAAS’s Sci-on-the-Fly) where she discusses the challenges of accessing paywalled literature when you’re working outside the traditional academic system. Here’s an excerpt:

Now, as we enter the Golden Age of information and technology – somewhere, somehow, this scientific information increasingly became locked away behind paywalls. Creating a system of scientific Haves and Have-nots, as university libraries become gateways open to those with the right netIDs. As increasing numbers of us wander from the academy, whether working for non-profits, as high-school teachers, writers or god-damn independents – we risk losing access to this trove of essential data. And the larger scientific community, I think, risks losing us along with all the time, and money and knowledge it took to train us.