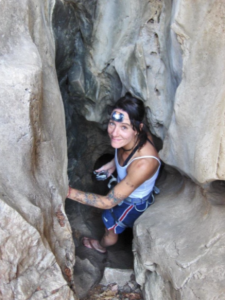 What is an Environmental Archaeologist, most people ask. My best answer is simple: I uncover patterns hidden long ago in nature to help humans understand more about life and their place in it. Taking this knowledge and passing it forward as a teacher honors my belief in giving back more than I take. Cycles and Patterns are what I search for, whether it be the synchronicity of the fireflies I watched as a girl, or the years between the cicadas return, nature imprinted deeply.

My research is interdisciplinary, having a PhD in Environmental Archaeology/Science, a Masters in Solar Architecture and a Bachelors in Architecture and Anthropology. In the form of paleoecology, my methods include coring lakes, palynology, oxygen isotope analysis of aquatic cellulose and archaeology. Spending the last 14 years on Rapa Nui I wanted to know if the story of humans cutting down their forests and causing collapse were true? Could it be something else like climate change that caused the disappearance of the giant palm trees. And there was! Discovering a returning extreme climate event began in 1390AD and peaked in 1456AD causing dormancy of the giant palm forests for 115 years. It was this event that weakened the forest ecosystem and caused irreversible change to the natural and human world.

Plants tell good stories. Their dispersals are biogeographic markers in migration and ethnobotany, as well as ecological indicators to climate and landscape change. How humans use nature in their architecture, how they molded clay balls to alter temperature of boiling water, which wood was used to cook with, the mix of the earth walls, their thickness to alter temperature, and symbols and markers left behind reflecting the cosmos are some of the things in my research. Looking at the connections between water and culture change is just as exciting as hearing the heartbeat of a giant palm tree and discovering tree holes in an ancient plaza as a last attempt to keep them alive. These moments of discovery bring reverence to life, and therefor is my research quest.

Current Projects: An Illustrated Plant Medicine Book based on the last 15,000 years of natural history uncovered in the fossil pollen. It is my promise to help the people of Rapa Nui grow their native medicine and food plants once again and help them replant the forests.

Continuing the on-going research of a 5,000 year timeline between punctuated climate shifts (drought and floods) and cosmic events (comets and supernova) and their reflection in culture adaptation amongst the Rapa Nui, Mayan and Anasazi.