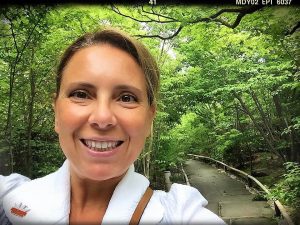 Dr. Gloria R. Montebruno Saller is an Independent Scholar/Researcher in Japan Studies. Born in Italy, Dr. Montebruno Saller moved to the United States to pursue her doctoral degree in East Asian Languages and Cultures at the University of Southern California from where she received her doctoral degree. She taught Japanese Language and Culture courses, Women’s Studies and Global Studies courses at the University of Southern California; California State University, Long Beach; California State University, Fullerton; University of California, Riverside; and at the University of La Verne. She presented her research at conferences worldwide and published her works in several academic journals. Dr. Montebruno Saller’s current research focuses on the history of Japanese and Japanese American Atomic Bomb survivors residing in the United States and their social activism through CABSUS (Committee of Atomic Bomb Survivors, United States) and ASA (American Society of Hiroshima-Nagasaki A-Bomb Survivors). Currently, she serves as the Honorary Director and Historian of the American Society of Hiroshima-Nagasaki A-Bomb Survivors in Los Angeles, California.

In the USA, I am Honorary Director and Historian of the American Society of Hiroshima and Nagasaki Atomic Bomb Survivors (ASA) of Southern California. This non-profit group is comprised of Japanese Nationals and Japanese American atomic bomb survivors. My focus is on introducing to the world some of these Japanese American atomic bomb survivors’ stories. Their eye witness accounts are relevant as they can be placed at the intersection of Japanese and American history. My research has also unveiled the presence of many Japanese American children in Hiroshima/Nagasaki in 1945 whose parents and/or siblings had been interned in the USA sponsored relocation camps during World War II. I am interested in their biographies as they help us understand their character and determination when, in the 1970s, they started their peace education through social engagements in the United States.

This is a multi-faceted project. One of my goals is to trace these survivors’ steps after August 1945, while still in Japan, until their departure to the USA around 1947-48 along with their life challenges as they settled back in the USA. A closer look at their testimonies helps us to shed a noteworthy light on the record available on atomic bomb survivors in general as far as their national and gender identities are concerned. By investigating these individuals’ struggles (1) to survive after the detonation; (2) to secure safe transport back to the USA after 1947; (3) to re/start their life in the USA; (4) to obtain medical assistance from both the American and Japanese governments; (5) to blend their life experiences with the realities of post-World War II American society; (6) to make their voices heard through community outreach programs. I intend to show how these individuals’ experiences convey the voices of a generation of individuals left to fend for themselves at home (USA) when it came to claim their rights to appropriate medical care, emotional assistance, and support to overcome daily struggles to accomplish simple tasks.