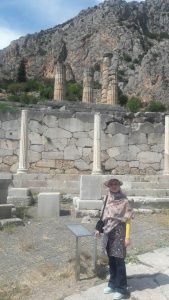 Biography and region of interest: I am an independent scholar of philosophy, and I got my B.A of philosophy (2015) from the University of Tehran, Tehran, Iran, and my M.A of western philosophy (2017) from Alammeh Tabataba’I University, Tehran, Iran. Since January 2018, I have been living in the US, Carbondale IL, and I have sat in some graduate courses at Southern Illinois University Carbondale. I have strong interests in ancient Greek philosophy, especially Plato. For my M.A thesis I worked on the issue of “self-predication” in Plato’s dialogues, and I examined the origin and meaning of this problem in ancient Greek language. I am also drawn to the philosophy of education with the focus on the Socratic Method that is used in Plato’s early dialogues, considering whether it is possible to apply this Method to philosophy students in current academic systems.

Activities in the academia: During my master’s study, I served as a teaching assistant for two semesters in “History of ancient Greek philosophy” course, in which I guided large discussion sections each week, and I attempted to use Socratic Method as applied in Plato’s Euthyphro in order to present philosophy in a way that both relates and is applicable to students’ lives and inspires them to seek what “Piety” is. I also aided my Greek professor for two semesters to teach elementary Greek to undergraduate philosophy students. Meanwhile, I tried to analyze how a Persian could learn Greek well and what problems s/he might face.

Conferences and publications: More recently, my paper on the report of the “History of ancient Greek philosophy” course was accepted for presentation to the conference Sapiens Ubique Civis VI at University of Szeged, Hungary in August 2018, and I have also submitted it to the Journal of Classics Teaching, Cambridge core. My other research on Plato’s philosophical education is about Platonic love based on the Plato’s Symposium, examining similarities between the two endless paths of Eros and philosophy with the emphasis on the role of “educator”. Recently, my paper on this research titled the role of “descent” in Socratic ladder of love has been accepted for presentation in the 36th Annual meeting of the Society for Ancient Greek Philosophy, which will be held in October 2018, at Christopher Newport University, in Newport News, VA.

My secondary interest and related cultural activities: My secondary interest, as an Iranian, is ancient Persian history, literature and tradition of wisdom, especially in relation to ancient Greek Classics: in philosophy, common ties in Greek philosophy and the tradition of Zoroastrianism, in literature, the comparison between Homer and Ferdowsi, and in politics, the differences of these two histories and cultures bringing about two totally different kinds of political system, namely democracy and imperialism. I worked as a member of administrative staff of “Marathon Reading of Homer’s Odyssey”, under the auspices of the Embassy of the Greek Republic in the prestigious Fajr Theatre Festival in January 2017, Tehran, Iran, and I was awarded to participate in “Marathon of Homer’s Odyssey” in Athens, Greece, September 2017.