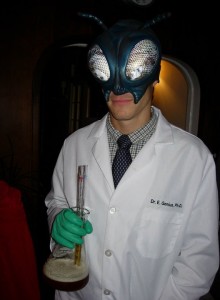 I study a number of topics in evolutionary genetics using the genetic model organism Drosophila.  I am currently investigating the hypothesis that selfish genetic elements acting during spermatogenesis are a major driving force shaping genome evolution and patterns of speciation.

Genes that function primarily in the male germline (testes) of species with XY sex chromosomes, such as Drosophila and humans, show extraordinary patterns of molecular evolution, genome organization, and play a disproportionately large role in speciation.  In fruit flies, as much as 10% of the genome is expressed solely in the testes; no other tissue has so much dedicated genetic material.  These testis-specific genes are unusually evolutionarily dynamic: their births and deaths account for a large proportion of recent genic turnover, and many multi-protein complexes contain recently evolved testis-specific subunits that replace proteins utilized in other cell types. Testis-specific genes are strongly enriched for evidence of recurrent positive selection, and their expression is extraordinarily dynamic between even closely related species.  In species with XY sex chromosomes, hybrid male sterility is overwhelmingly the earliest form of intrinsic postzygotic reproductive isolation, suggesting that the rapid evolution of testis-specific genes drives the tempo and mode of speciation.  This observation, first made by Haldane in 1922, remains one of the most well-behaved and striking patterns in evolutionary biology, and is still wanting for an explanation. Thus, a major unanswered question in molecular evolution and speciation genetics is why gene sequences and regulation evolve so rapidly in the testes, and whether this rapid evolution can explain the enrichment of hybrid male sterility factors on the X chromosome and Haldane’s Rule.

My research focuses on the hypothesis that these patterns can be explained by the existence of sex-chromosome meiotic drive elements.  In animals with differentiated sex chromosomes, selfish genes that exploit meiosis and gain representation in greater than half of an individual’s gametes are expected to evolve readily on the sex chromosomes.  I predict that the rapid evolution of sex-chromosome meiotic drive elements, their antagonistic co-evolution with suppressors and genomic defense mechanisms, and concomitant evolutionary turnover of the genetic control of spermatogenesis are responsible for the evolutionary dynamism of genes that function in the testes and for Haldane’s Rule.

I am currently a research scientist at Indiana University.  My work is currently funded by a grant from the National Science Foundation and funds from IU.