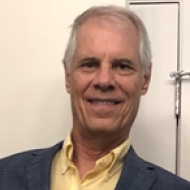 James Brannon has devoted the last decade to pursuing academic interests at the intersections between science and humanities, including recent work as an independent scholar of the history of ancient, medieval, and Renaissance astronomy. He prepared for this career by earning MA degrees at Stanford (Master of Liberal Arts, 2013) and the University of Wisconsin-Madison (History of Science, 2016). During the past five years he has undertaken manuscript research at a number of foreign and domestic libraries, written and published scholarly articles, and contributed oral presentations at international conferences. He is an active member of the History of Science Society, the American Historical Association, and the American Physical Society.

Much earlier, and after earning a doctorate in Chemical Physics at UC San Diego (1979), James spent a twenty-five year career as a research scientist and engineer with IBM, where he explored the interaction of laser light with material surfaces for scientific studies and industrial applications. During this first career, he published more than fifty peer-reviewed technical articles, including invited papers, invited chapters in edited books, and a monograph on excimer laser ablation (American Vacuum Society, 1993). He also holds twelve US patents, and presented both invited and contributed talks at dozens of US and international conferences. He was engaged in numerous professional activities, such as organizing technical conferences, an expert witness in lawsuits, consulting for several companies, a long-time instructor for classes on laser applications, recruitment committees for IBM, and acting as a technical liaison between industry and academia.

James and his spouse live in Menlo Park, CA. When not engaged in academic pursuits, he enjoys cycling, backpacking, listening to music, and time spent with his son.

art, science, history, humanities
We use cookies on our website to give you the most relevant experience by remembering your preferences and repeat visits. By clicking “Accept”, you consent to the use of ALL the cookies.
Do not sell my personal information.
Cookie SettingsAccept
Manage consent