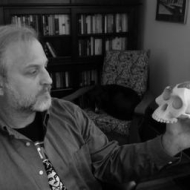 Genomic imprinting is the phenomenon where the pattern of expression of an allele depends on its parental origin. Imprinted gene expression is thought to be the result of an intragenomic evolutionary conflict between matrilineal and patrilineal expression strategies. Jon is particularly interested in understanding the origin of such conflicts in the context of cognition and behavior, and in understanding the consequences of intragenomic conflict for phenotypic evolution at the level of the individual organism.

Jon's third major area of research is on the evolution of robustness, and how patterns of robustness and epistasis are shaped by natural selection.

You can find out more, read about evolution, download papers, and learn more about Jon's other endeavors (poetry, webcomic, etc.) at http://jonfwilkins.com.

http://jonfwilkins.com
Biology, Genetics, Epigenetics
https://orcid.org/0000-0001-6405-6538
https://scholar.google.com/citations?user=I_E3mpgAAAAJ&hl=en
https://www.researchgate.net/profile/Jon-Wilkins-2
We use cookies on our website to give you the most relevant experience by remembering your preferences and repeat visits. By clicking “Accept”, you consent to the use of ALL the cookies.
Do not sell my personal information.
Cookie SettingsAccept
Manage consent