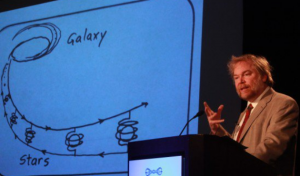 I am currently engaged in laboratory and theoretical explorations of the role of electricity at planetary and stellar scales. Large scale electric fields and currents have not received much attention in astronomy – in fact for almost a century they were proclaimed impossible, hence research into them was made impossible at any established research center.

Looking at electrical connections between stars and planets is just as interesting as looking at the electrical connections between bees and flowers, or between aphids and leaves (http://www.experiment.com/aphids). Nature is constantly effecting communication through electric fields and currents. And with the mountains of satellite and telescope data coming in, the astrophysical community is poised to revise many explanations that up until now have only used gravity and nuclear forces, to include the causative role of electric fields and currents.

Through private funding I am working on various aspects of this study. You can see a short video describing some here https://youtu.be/hbWdxqo1FI0 (Ionospheric electron fluctuations, Jan-2016).