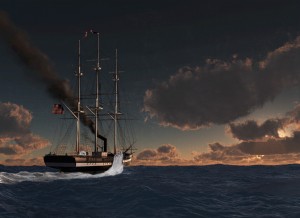 I am an independent historian who focuses upon the interaction between humanity and technology, with a particular specialization in the first generation of steam-powered vessels.

These craft allowed humans to use an artificial power to change their location to practical effect faster than by natural means. As such, steam-powered vessels represent the first in a family of time-and-space altering “high technologies,” leading all the way up to the present-day internet.

The first generation of humans that saw these vessels reacted in a variety of ways, from enthusiastic acceptance to skeptical denial. It is this range of reactions, and the means by which the skeptics were won over (or not), that is the focus of my research. By studying past generations’ acceptance of or resistance to technological change, we will better understand where we have been, where we are, and where we might be going.

This is no small matter. Two centuries ago, the words “boat” and “ship” had very distinct meanings in the English language. A “boat” was generally defined as a vessel to be used in protected waters, while a “ship” was the largest type of ocean-crossing vessel (three-masted, square-rigged). I have devoted years of research to discovering the true story of the very first steamship in history, the Savannah, and her creator and captain, Moses Rogers. By proving that is was possible to safely cross the ocean using the artificial power of steam, the Savannah became the first example of globalized high technology in history.

The result of this research is my book entitled “STEAM COFFIN: Captain Moses Rogers and The Steamship Savannah Break the Barrier,” described by numerous reviewers as the definitive account of what truly is America’s own sea saga.

My next book will explore technological cross-fertilization between the United States and the United Kingdom in the early 19th century.

Find out more at http://www.steamcoffin.com/sc/Home.html.