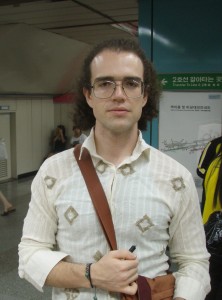 My research interests and projects are all related to the collection and analysis of geospatially relevant data sets.

Safecast.  This project was initially set up to monitor and map radiation from the Fukushima meltdown in Japan.  This is done using hardware, designed and built by the Safecast team and our manufacturing partner Medcom, which records the level of radioactivity at a gps location and logs it to an on-board flash memory card for later analysis and mapping on a publicly accessible database.  The radiation monitors are portable, and as such we have no recorded over 12 million data points across the planet.
This project has now begun branching out into air quality monitoring, with a focus on common atmospheric pollutants and particulate matter.  Our current focus is to get a network of air quality monitoring devices relaying geotagged air quality metrics to a publicly accessible database for use in the public as well as for academic researchers.

Global Sensor Web.  The Global Sensor Web is an online service and application which allows for the public to use a network of devices, such as mobile phones, to monitor their environment.  The information gathered from these devices and their on-board sensors, such as magnetic field strength from a phone’s compass, will then be logged in an open online server in an easy to query database for both members of academia and the general public.  These data sets can also be concatenated with other public geotagged data sets, such as climatic data from NOAA or seismology data from the USGS, to provide for a richer data set to look for potential patterns in nature over large geospatial scales.  We are also developing an online data aggregation and analysis platform for hosting a variety of citizen science projects so anyone with a mobile device will be able to collect scientific data, and anyone with an internet connection will be able to analyze scientific data.

Reefquest.  Reefquest is a project to monitor the health of reef sites, and to provide the tools for citizen scientists to help with the monitoring efforts remotely.  In Reefquest our dive team has captured a large number of high resolution images of target reef sites in order to measure the health of the sites from color data.  This data is also being merged with remotely logged temperature data, which can be used to infer local current velocities, allowing for potential tracking of the point source pollution and elevated heat levels which are damaging to the reef ecosystem.

BioSCAN.  This first-of-its-kind scientific investigation will discover and explore biodiversity in and around one of the world’s largest cities: Los Angeles. In three years of sampling from the urban core right out through less-urban surrounding areas, we will focus on the insects, the most diverse group of animals on our planet.
We will discover and document the diversity of insect species living with us in Los Angeles as well as test intriguing hypotheses about how natural areas around the city affect its biodiversity, and specifically, how light in the urban environment is affecting its inhabitants.

Find out more at: http://scienceland.wikispaces.com